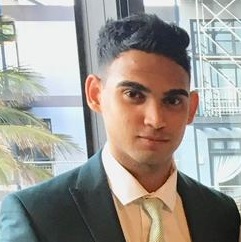 Mohammed Bux is the son of Dr. Fareed Bux and Fathima Bux. His father was an inspiring doctor who provided the highest level of care to all of his patients in Qwaqwa in the Free State Province, South Africa. He was there when children needed care, he was there for his stroke patients and helping them literally get back on their feet. He was also there during the Coronavirus pandemic that is still sweeping the world. He then lost his own battle against Covid-19 and left a dark hole in the lives of his family and patients.

His son, Mohammed, lost his idol. However, he did not lose is dream. He wants to walk in the large footprints that his father left. He took a step towards becoming a doctor by applying but he was then advised to start off in Dentistry at UWC (University of the Western Cape), which would give him stepping stones towards becoming a doctor due to course similarities. He applied but was then denied entry, even with aggregate marks befitting a medical degree.

During December 2020 and January 2021, he spent time in Qwaqwa and “Only then did I realise what a loss it was to the community of Qwaqwa.” – M, Bux.

This is a young man who would work his fingers to the bone to become a doctor and frontline worker for the community.

Now that he lives in the Western Cape, he hopes to continue his studies, but on the path of becoming a medical doctor at the University of Cape Town or Stellenbosch University. He states that “the university will never regret their decision. I will make you very proud one day.”

And, even though he may not be the man his father was, that he would still strive for that level of excellence. His father started his practice in 1987, with limited sanitation and resources during a very difficult time for the country. But, this never stopped him and he continued with his work until he passed away.

Mohammed’s sister and her husband were also inspired by Dr. Bux and the work he did and their mother is always in support of them. She gave her son a voice to speak his mind and ask that he be given the opportunity to carry his father’s name and legacy on his shoulders. He says, “If I am given that chance then I will probably get closure I want to do medicine to help our people like my dad did and wherever in the heavens my dad is to put a smile on his face” – M, Bux.

Mohammed and his mother had reached out to Dr. Maggie Mojapelo-Mokotedi, CEO of Mediwell and Founder of Healthcare Workers Heroes Memorial. They wanted to find a new avenue and voice his plea after discovering the Healthcare Workers Heroes Memorial initiative. Showing that they are willing to do anything it takes to become a medical doctor and walk in his father’s footsteps.

Dr. Maggie Mojapelo believes that by giving Muhammad a chance its the highest honour as a country that we can bestow upon Dr. Fareed Bux our colleague who succumbed to Covid in the frontline serving humanity.

All he needs is to be given the chance to present his work and dedication so that he can study, learn and, in future, provide the highest quality healthcare that his father gave to his patients and community.

Mohammed isn’t just a young man who wants to be a doctor, he wants to carry on the great work of his father and heal those who are suffering. This is why he should be given a chance to study and become a medical doctor for many years to come. He was denied entry once and hopes that his next appeal would be successful.

If you want to be part of this young man’s plight, contact Healthcare Workers Heroes Memorial. Info@healthworkersheroes.org.za